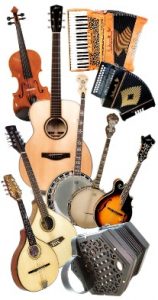 Bodhran belongs to the family of percussion instruments and is known to be the lifeline of Irish music culture. Previously it was used in war situations or to celebrate a victory but then with time, it was given the title of a music instrument due to its growing popularity. The Bodhran is a variation of the drum and is made from the skin of a goat. The instrument is played by striking the wooden frame encompassed with goatskin with a short wooden stick. It is available in abundance in Ireland and comes in various sizes and styles depending on whether you want it for decorative purposes or for playing.

You might have noticed that in every culture there is a musical instrument that resembles flute and for Ireland, that would be the tin whistle. There is a unique way of playing this instrument and that is what makes it different. Due to its small size, you can easily carry it around with you and another great thing about it is that it can be bought at an affordable price. Many schools in Ireland teach their students how to play this instrument so that they start their journey in music with a slightly easy option. For professional musicians, tin whistles come in a lot of varieties with different keys and materials. 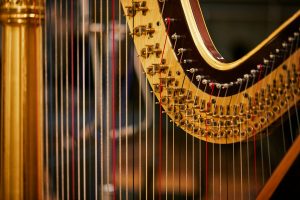 Harp represents the Irish culture and has a symbolic meaning which is why it is a part of the country crest. But instead of Ireland, harp originated in Asia which is quite surprising given its connection with the Irish history. Many believe that people like Brian Boru and many others knew how to play this instrument and it was a commonplace thing to have a harp player in the house. Other than this, the harp is also perceived as a political symbol of Ireland and is a part of Irish coat of arms, Irish passport, the presidential seal and more. In addition to this, every summer Roscommon hosts a harp festival in honour of this historic instrument.

Uilleann pipes are considered to be the national bagpipe of Ireland and are also known as Union pipes. This music instrument resembles the Scottish bagpipes and as a matter of fact, they both share the same origin. Uilleann pipes are not played in pubs but rather on special occasions such as the parade for St. Patricks day. At this procession, you will be able to witness the magic of this divine instrument and the talent of Irish musicians.

The translation of Sean-nós is ‘the old style’ and refers to the unique singing style in which a particular syllable of a word is sung in different notes. Although the song which is chosen is simple but the way of singing makes it complex and difficult. Therefore, only a professional singer who knows this art can sing in this style. The songs can be in both Irish and English language. It can be a powerful act to witness especially when performed by a professional Sean-nós singer.

Fiddle resembles with violin in appearance and in some ways to tin whistle as well. Again, it is the way in which this instrument is played that gives it a unique touch. You will come across many live music events in the Irish pubs where fiddle is played with great enthusiasm. Once you have heard it, only then you can understand how it is different than a violin. The fiddle has had a humble beginning as it was mostly played in kitchens, wedding, streets and other places before it became quite popular. It has grown to become one of the most vital instruments in Ireland. 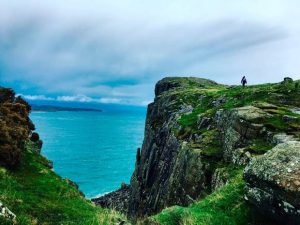 Musicians like Carmel Quinn, Dempsey, Hozier, Mick Flannery, and others are the gems that were born in Ireland. Their contribution to music is immeasurable. Ireland has a long history when it comes to music. Not to mention, the people living there know how to play various instruments. So, if you ever pay a visit to this country, you will surely come across some great live music concerts that will soothe your soul.

The Scenario of Traditional Irish Music

During their visit, tourists prefer listening to traditional music to understand the culture of the country. However, in most of the pubs, musicians can be seen singing popular songs instead of the traditional ones to keep up with the changing trends. But if you look harder, you might be lucky enough to come across some traditional musicians. 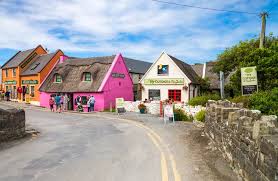 Walk around the villages and towns close by the place you are staying at and look for the pubs that host traditional music shows. Many of these pubs usually hang a sign outside the door to let you know what type of music they play.
Other than this, you could ask people at your guesthouse to help you find a good place in the area. If nothing works, then you can take the help of the internet to search for places hosting live shows. You might face some difficulty in case you are staying in a small town but there must be a few good places for sure.

Fleadh Cheoil is an Irish Music festival held annually in America and various isles in Britain. It includes all the forms of Irish folk music and the competition has various stages and categories. You can check to see whether this festival is scheduled somewhere near the place you are staying. It will be an amazing experience and is worth your time and money.

If we look at the modern history of Ireland, we will come to understand that the showband style had a special place in the dance halls especially during the 50s, 60s & 70s. People still look up to musicians like Big Tom, Margo who are known for playing dance hall music as well as the modern tunes in that technique.
They do a lot of music tours, so you can check on any event listing website to see where they are playing at the moment. You might get lucky to attend one of their shows.

Music Shows and Festivals in Ireland 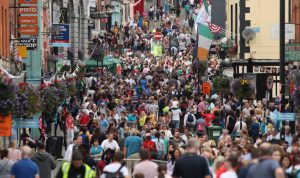 In Ireland, you will come across numerous music festivals and shows which might be ticketed or for free. These festivals comprise of many genres and styles meaning you will have a variety of options at your disposal.
You will get an idea from the festivals that have been listed below:

In Ireland, street performance is legal and quite common all around the country. The act can range from a single person playing an instrument to an entire band performing various pieces. Many people became famous because of busking like in the case of Ed Sheeran who started his career as a street artist and is now one of the most popular artists in the world. Street artists can most commonly be located in the area around shopping centers as it is always bustling with people.

So, if you stop to see them performing, do not forget to tip them as they too are trying to earn a living. And especially if you are recording them, then it becomes essential you pay them a generous tip. 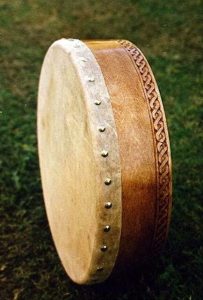 ‘The Soldiers Song’ or ‘Amhrán na bhFiann’ is the national anthem of Ireland. Since the song has been written in Irish, you will not find many people who are well versed with it. However, there are other anthems that are quite popular with people. This includes Irelands Call and The Fields of Athenry, both of these are usually sung to cheer the sports teams.

One thing about Irish people is that they adore their music as is evident from the diverse variety of music styles played in the country. They frequently visit pubs and bars to enjoy live music. You can locate these venues online with the help of websites such as Dublin and Planet gig.

Ireland has some of the biggest stadiums including Croke Park and Aviva where big names like Beyonce and Springsteen have performed. Check to see if someone is playing at the time you are in the country.

Other than this, there is the option of Musical Theatre and Opera shows. Two of the famous theatres include Bord Gais Energy Theatre and Cork Opera House. The former is known for hosting modern productions like The Lion King, Nixon in China and more. Whereas the latter hosts classics as well as contemporary musical productions.

Apart from all this, there are music festivals wherein a lot of modern musicians of international repute perform their pieces. For example, Slane and Electric Picnic come under this category. You can either buy the tickets for the whole event or for a single show.