Born on the seventh of May in 1945, Christie Moore was one of the founders at bands Planxty and Moving Hearts. The year 2016, witnessed a new album by him, though his first album was out back in 1969. Such was his popularity, that RTE named him Ireland’s greatest living musician in 2007. The following interview with Christy Moore was taken by Martin Chilton and originally dates back to March 2012.

More than often we assume songwriting to be a fun and frolic job, but Christy Moore, who has spent 50 years in the trade, thinks otherwise. In fact, he claims it to be a process replete with pain. Born in 1945, Christy Moore due to his age, now focuses on words that he sings. Unlike his thirties, he can longer take just any song, memorize it and sing it away to his fans. He now has to work hard for every word in each song.

Since he has to be comfortable with every phrase that he sings, he looks for the most optimal words. For this, he writes down the lyrics and also safe keep all the revision notes, be it a dozen pages, or more. It’s a hard job to do, but his passion for singing, is the fuel that keeps him going.

Over the years, Christy Moore has composed a number of humorous songs, from Lisdoonvarna to Delirium Tremens, and many more, but with time he has taken a more intense route. It’s been over 37 years since he turned sober and is left with his addictions of anything but singing. And if asked if it’s hard keeping away from the old habits, he exclaims that he is blessed with a passion for what he is doing, and though hard sometimes, it helps him to stay on the path he has chosen. Besides, he loves going out for walks, watching movies and theatrical plays, and some exercise as well. Safe to say, he is a fan of sports.

To talk a little more about sports, his first encounter was in his younger years. He stands up and gestures to throw shot put, with the gleam that he must have carried during his school days. During his schooling at Newbridge, County Kildare, he was a Gaelic football and rugby player, while he also played shot put and rugby, besides swimming. He was on multiple teams and not to forget, he sang in the choir a swell. The school was thus his favoruite place to be in.

However, of all the sports that he’s been into, football was his favourite. He also narrates a brief history for this. In 1961, when he was 16, he came to London for the first time, to earn from some summertime jobs. He was staying in Chiswick, and often visited the Craven Cottage, back when Johnny Hayes was still with Fulham. Gradually, he visited Old Trafford, apart from other lower league grounds of Rochdale and Bury, when he moved to Manchester. He was young and energetic at that time, but he took a dislike to the hatred on the terraces of Chelsea, and never looked back. Now, though he’s busy, he still manages to find time for the Match Of The Day. 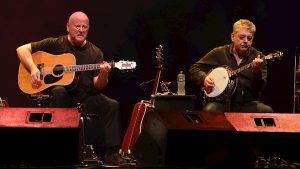 When Christy Moore met the very impressive George Best, he was inspired to write ‘Butterfly’, a heart touching ballad. George Best, the northern Irish footballer lived in the era when clubs and collaborative musicians reigned the roost. And with high regard for the time, Moore encourages young talents, like Declan O’Rourke for instance, who still retain the collective spirit of the good old days.

With his long career span, Christy Moore has witnessed many transformations in the industry. Back in the sixties, Moore used the same set of strings until they perished, on his cheap guitar and traveled with a sleeping bag. Today, he says that a lot has changed, especially the sound systems and the guitars. He now has three guitars as travel buddies, besides eight other musicians and singers. And none of those three guitars make to his home. However, he doesn’t really find it to be a better world, neither otherwise. In fact, he would still love to play in a folk club sans any PA system, and the same goes for places like the Royal Festival Hall. So, he is happy, either way.

Time and age couldn’t impact his memory for lyrics, though at some exceptional instances he finds himself stuck. If he does forget the lyrics in between, he asks the audience to dig out the lyrics he missed, and it always comes in handy. But he still prefers using a back catalog instead of a nice setlist. Also at times when his medications go wrong, or he draws blank for some other reasons, he carries a book on stage, which he calls his ‘menu’, as it contains the song that he finds that trouble his memory the most.

Moore totally dislikes the competitive TV shows that have become the new craze, however, he admits that RTE’s The Voice Of Ireland, is an exception. He enjoys watching it, for its surprisingly too good.
Moore has played at hundreds of venues in London, but most were at London’s Royal Festival Hall. However, his favourite pick is the Kentish Town Forum, despite how sweaty and heaving the experience is. Half Moon in Putney is his other favourite, while the Royal Albert Hall is probably the last in the list. This is because of the presence of too many uninformed stewards and empty executive boxes at the Royal Albert Hall.

His partner on his current musical tour, is Declan Sinnott, who has been by his side for a decade now. Though working on his own album now, Declan was in Moore’s ‘Moving Hearts’ band in the eighties. Due to his deep deep knack for words, Moore has been visited by many great songwriters to the likes of Bob Dylan, Woody Guthrie, and Ewan MacColl. He specifically remembers that he heard Ewan MacColl for the first time, on a friend’s old and shabby record player.

Chris, ty’s latest album, Folk Tale came in 2011, with his main focus on touring. However, sparing the details he also mentions that he is working on a special concept, that he wishes to put forth via an album. When asked if there are any particular songs that he always wanted to get a grasp on, he tells that there are two. And the two songs are When a Man Loves A Woman and and Fall To Pieces, which are hit songs by Percy Sledge and Patsy Cline, respectively.
Moore also briefly worked in the Bank of Ireland in the sixties, was also a political activist and a party animal, all at the same time. The only thing which he still retains in his heart is music. He was first inspired into songwriting by seeing drops of rain running down the banners during a protest rally in Dublin. And he totally cherishes the memory.

With not even a slight drop in his work ethics, Christy Moore, one of Ireland’s top music folks, has no plans to stop his musical quest. He says that since music never became a job for him, and every time on the stage, gives him a kick to keep going. He claims to live in his own work cocoon and he happy the way things are.